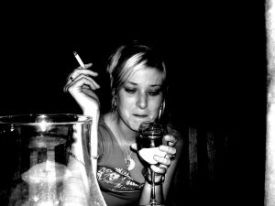 Sure I’ve had my “unclassy” days- my days in college where my shirt was a little too low-cut, I drank a little too much, and swore a little too often. And while I’m not the perfect lady at all times, somewhere along the line, I grew up. I found class and most of the time, I think I exude it.

What is class? “Elegance of style, taste, and manner” according to the dictionary. To me, class is not advertising the fact that you’re a slut. It’s not dressing like a whore and yet walking around complaining that guys only want one thing. Having class is having confidence, it’s being funny without being vulgar, it’s being sexy without being trashy.

From my experience, I’ve seen that class is NOT a desirable trait in women for most men around here.

Most of my female friends understand what class is. They are beautiful, educated, smart, funny, driven women who would make any man happy. But that’s not what most men appear to be looking for. I see guys being attracted to trashy, potty-mouthed women who wear next-to-nothing anytime they step out on a Saturday night.

I’m not hating on these women- that’s their choice if they wish to act like that and dress like that. No one should hide who they really are. I’m just curious as to why men are no longer attracted to a woman with class. A woman with class isn’t always a prude. Women with class can be sexy without being trashy- isn’t that desirable?

If having some class is what is keeping me and some of my friends single, then so be it. We’re not a bunch of no-personality-having prudes or anything. I’d guess I’d rather wait around for a man who desires a woman with class than worry about the ones chasing women with none.

Ladies- what do you think? And guys, feel free to shed some light on this. If guys are going for women with no class, is it because they are only looking for fun, and not a serious relationship? Or is it something else?

3 thoughts on “When did class go out the window?”