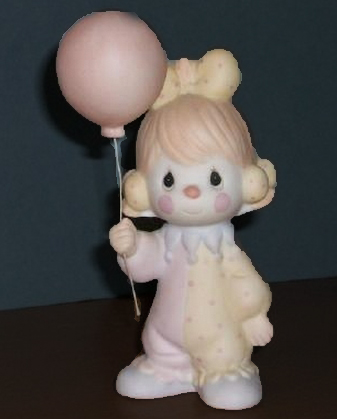 Each Christmas, there was always one guaranteed gift under the tree: a Precious Moments figurine. The pastel, porcelain, big-eyed figures were a huge collectors item in the 80’s, and each year Santa would bring me a new one.

I loved them! Their sweet, innocent faces and Bible verse stamped on the bottom made them so special. But the disappointing thing about Precious Moments was how fragile they were. You couldn’t play with them, only set them on a shelf and look at them.

As a child who made salt and pepper shakers at restaurants put on shows and talk to each other, it was obviously very difficult for me to just look at my Precious Moments. They were just dying to talk, to dance, to have tea parties, and live in a world as spectacular as the one my Barbies were in.

It was only a few days after Christmas one year, I think I was about five years old, that I asked my mom if I could look at all my Precious Moments.

“Yes, but be careful. They break very easily,” she said as she spread out more than a dozen Precious Moments on a towel on the dining room table. “Don’t touch them, just look.”

Mom left the room, and I was in awe. There they were, spread all over the table like a little Precious Moments village. There was the clown, the one with a harp, someone was making a salad, another had been shopping. They were just begging to come to life! They had so much to do! So much to say!

I couldn’t resist any longer. I grabbed the clown. She was so adorable with her face paint and balloon. I knew she wanted to dance. I hopped her around the surface of the table, saying hello to the other Precious Moments as she did so. One of them stopped her.

“Hello Clownie!” said a Precious Moments with a harp.

Before I knew it, the two were in full-blown conversation and things began to get intense. They talked more and more and even began to jump around! They were so happy to finally have a voice and to be able to move! 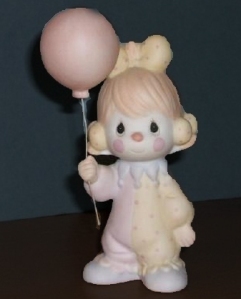 Clownie and the other figurine collided.

Clownie had been decapitated. Her head rolled across the dining room table. The room began to spin and I couldn’t breathe.

Just then my mom yelled from the bathroom, “Nat! I’ve got your bath ready!” I quickly grabbed the clown head and gently rested it on the shoulders of the clown. It would have to do for now until I thought of a great idea to get myself out of this mess.

After my bath I dried off and put on my pajamas. Then I heard the reaction.

I began to cry and to make the walk to the dining room. There was mom, holding Clownie’s body in one hand, her head in the other.

“What happened?” she demanded.

“I was makin’ ’em talk,” I said quietly, so quiet that she didn’t even hear me.

“What?” she snapped back.

“Natalie, I told you not to touch them! I paid good money for these!”

I stopped crying. I was confused.

“THERE IS NO SANTA CLAUS!” she yelled. I mean literally, full-blown yelled it at me. “I paid for these!”

The tears returned, and came as quickly and as heavily as ever. My heart literally broke in two. Mom was mad at me, Clownie had no head, and Santa wasn’t real. So much to take in at such a young age.

For years we’ve talked about how that one moment probably ruined my life. We often joke about how someday Oprah or Dr. Phil will have my mom and I on the show and we will talk about that terrible day that she screamed at me that there was no Santa Claus.

Clownie’s head was glued on with ease, but she and the other Precious Moments were silenced for eternity. Never again would they speak, sing or dance. Although it ended in tragedy, they would never forget the day they came to life. And neither will I.