We were there to help, to lend a hand, to show God’s love. But before we could do any of that, I was approached by a boy who looked to be about 10 years old.

I was caught totally off guard. 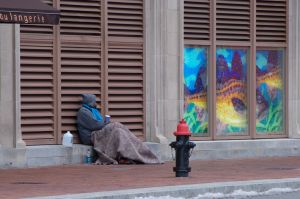 “I’ll find you later,” he said and went to hang out with some of the other boys at the center.

About a dozen of us from my church went to Interfaith Hospitality Network (IHN) to serve a meal and spend time with some of the residents this evening. I think it’s safe to say they probably touched our lives more than we touched theirs.

The families there were homeless without the help of IHN. But IHN gave them a place to live while they looked for jobs and went out on their own again. I can’t imagine life without a home. Having a place to stay is something we take for granted. We just assume we’ll always have a home.

There were about seven families there, different races and different ages. They were all so appreciative of the giant Pizza Hut pizzas we brought, and the smiles on the children’s faces were some of the biggest I’ve ever seen.

One family in particular really stood out. It was a mother and a father, a few sons and a daughter. The daughter looked to be about 13, but she was severely handicapped. She would repeatedly slap herself, make strange noises and could barely walk, even with the help of leg braces. Her mom and dad’s faces told a story of great struggle and of pure exhaustion.

I wondered what their story was. Could they have been made homeless because of medical bills? Was their darling daughter like this from birth or was she in an accident? I didn’t know the specifics, but I do know that it broke my heart, and I will be praying for them.

After we served dinner, some of the kids asked me to play Ninja with them. It’s basically the hand-slap game where you try to move your hands before someone else slaps them. We had a great time, and of course, I was almost always the first one out. Need to work on my reflexes I guess!

I spent some time with a little girl named Peyton who insisted that I wear one of her rainbow-colored beaded necklaces she had made at school.

I talked to one teenage boy who is finishing high school by taking night classes and plans to attend Ball State next year. He’s not sure what he’s majoring in, but his face lit up when I told him how cool it was that he wanted to go to college.

Eventually I ended up with a beautiful two-year-old girl in my arms. Her hair was beaded in pink, purple and white and her big brown eyes made me want to never have to put her down. She loved my jewelry and played with my earrings and rings for as long as she could.

Jesus said we’re supposed to help the poor, and that when we do, we have served Jesus. But what about those who are poor? Who are they supposed to help? I saw tonight that they can help those of us who aren’t poor by asking to pray for us, or simply allowing us to come and serve them a meal.