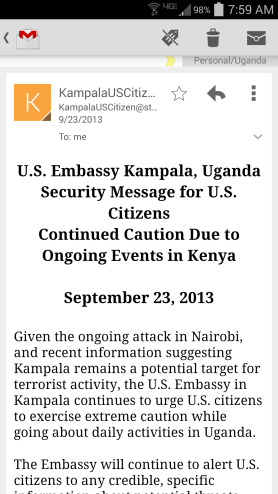 I’d been in Uganda less than two months when the first email from the U.S. Embassy arrived in my inbox in 2013. The Nairobi terror attacks were ongoing, and we were in the country next door. Our military was serving in Somalia, just as Kenya’s was. And that’s why they were attacked.

It was made pretty obvious that Uganda was next on the list.

It was scary. We have had varying levels of “terror threats” here in the United States, but I’ve never received an email from the government telling me to be careful about where I go.

While my co-workers, who had been in Uganda for more than a year, seemed to not worry too much, those of us who had never experienced anything like a serious terror threat were pretty uneasy. It didn’t help that my two European roommates at the time told me that the U.S. is paranoid and always sending out terror-threat messages. They completely brushed it off.

I might have smiled a little in October of that year when they said the same thing after I got my next email from the US Embassy, and within hours they received one from the Dutch Embassy as well.

Americans know terror. On September 11, 2001, we experienced true terror. We don’t take it lightly. And I thank God for that. I’d rather be “paranoid” and nothing happen than the other way around.

The emails continued throughout the year, but nothing ever came of them. Some were as simple as, “Be vigilant.” Others were more specific, “Don’t go to the mall this weekend.” And security at school was beefed up with armed guards and emergency drills.

Yesterday, from the comfort of my warm, cozy bed, I checked my Facebook and saw that Uganda was under another terror threat- this time a “shelter-in-place” terror threat. I don’t recall ever being on this type of threat when I was there. People were told to stay in their homes. Do not go anywhere. “This is serious” was the basic message the US Embassy and Ugandan police were sending.

It upset me. Uganda is filled with people I love. Some of them I know, others are just the people there in general, but my heart loves them all. I thought of Florence, I thought of Gideon, I thought of my teacher friends and their families. I thought of the guys selling toilet paper at the intersections downtown, I thought of so many wonderful people and how terrible it would be to lose even one.

I prayed, and then I went about my day. I went to my best friend’s house and we packed up her two boys and headed to the University of Saint Francis football game. We tailgated with her family and then headed into the game. It was a gorgeous fall day yesterday, and I couldn’t have been happier.

Then I remembered what was going on in Uganda. I started to feel guilty. There I was- enjoying the many luxuries we have in America, and people I love were stuck in their homes because of a terror threat. It just wasn’t fair!

Then it all came together for me, and I remembered this: It’s different when you’re there, especially compared to how Americans would imagine it’s like.

No matter the threat level, never once did I find myself cowering in a corner or hiding under my bed. If there was a warning to be vigilant in public, we were for about a day… and then we’d forget about it.

There was even that one time we were told to stay away from Acacia Mall because of a planned terror attack. But we really wanted Cafe Javas, which was right across the street. Cravings for Cafe Javas simply must be addressed! So we went. I remember telling my friends, “If we go and I die in a terrorist attack, my mom is going to kill me!”

It’s different when you’re there.

Yesterday I saw a few people post things on Facebook about how they aren’t living in fear because of the terror threats. Initially I thought, “Yeah right. Stop putting on that Christian front that you aren’t scared!” However, then I remembered what it was like to be there. Sure there’s fear to some degree, but you cannot let it consume you, or you’ll drive yourself crazy. Life must go on as normally as it possibly can.

I was pleased to wake up this morning and see in the news that although there really was a planned attack on Kampala, it was stopped. Praise God! But I imagine this is far from over, and my Ugandan family is in my prayers daily.

I now know how my family felt last year when I was there and the terror threats moved in. It’s scary because you automatically picture the worst. But for the people there, it pretty much just becomes another day. I can guarantee that life will continue as usual today in Kampala, as if there was or wasn’t a major terror threat the day before. I’m not, by any means, trying to minimize the severity of the situation, I’m just hoping to shine a light on how brave the people are who dedicate their lives to God in countries who face things like this every day. It’s sad, but terror threats have become so common for so many people in this world.

It’s different when you’re there. But that doesn’t mean I’ll stop praying for my loved ones in Uganda, their safety, and their mental well-being as they face a million other obstacles while doing God’s work in Uganda. Compared to some of the other junk they are dealing with, terror threats aren’t all that scary.

“Even though I walk through the darkest valley, I fear no evil; for you are with me;
your rod and your staff – they comfort me.” Psalm 23:4

One thought on “Terror threats: it’s different when you’re there”