I blasted Janet Jackson’s “Again” in my headphones as I cried myself to sleep night after night after my first traumatic heartbreak, which came in the 8th

grade. I was mad at Ben. Mad at Bob. More than anything, I was mad at myself. I gave up a deep love with Ben for one passionate night of hand-holding with Bob at the YMCA lock-in. What I didn’t expect was Ben to show up to play basketball at the YMCA while I was holding hands with Bob, the cute guy from a neighboring town.

It was super dramatic. I remember running away from them both and bawling my eyes out in the locker room, surrounded by my friends who were trying to help me decide who I really “loved.” At the time it was the toughest decision I’d ever had to make: Bob or Ben?

In the end, it didn’t matter. Bob never wrote me a letter (the main way you communicated with your out-of-town boyfriend in 1994), and Ben wanted nothing more to do with me. I was heartbroken. Nothing had ever hurt more. My world came crashing down at the precious age of 14.

Obviously, this was but a grain of sand compared to the sandstorm of broken hearts I would experience later in life, but I really didn’t need to know that. I needed to grieve. As silly and insignificant the situation was to my life, I needed to be upset. You could have told me that it was a Junior High relationship, and that it was not a significant problem to worry about, but I wouldn’t have believed you. 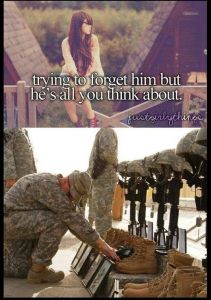 On Facebook a few months ago I saw a comparison of love memes and military photos. On top was a meme, no doubt created by a heartbroken high school girl whose boyfriend just dumped her. Phrases like, “When he’s all you can think about…” and “Being lonely is the worst feeling in the world,” accompanied by a photo of a sad girl by a tree or a lake or some other dramatic, lonely location. On the bottom of each was a photo that put the statement in perspective. A woman at the grave of her husband who was killed in war. A soldier wounded millions of miles away from home.

But there’s a time and a place for perspective. In general, this post going around Facebook had a wonderful point. However, if someone was suffering from heartache at the time and someone sent this to them to offer a little “perspective,” I think that’s incredibly insensitive.

Why force guilt onto people who are already struggling with something else? Not only that, but why tell people that what they are feeling isn’t valid, that things could “always be worse”?

When you’re upset or brokenhearted, the last thing you need added onto it is guilt. And yet I see it often. It’s basically non-sympathetic, forced guilt. It’s something people throw around way too often, in my opinion.

I’m quick to jump to the defense of the oppressed. I’ll open your eyes to the terrible living conditions I’ve seen in Nicaragua, Niger, Zambia, Uganda, and Kenya. I’ll give you a million reasons why your day wasn’t as bad as it was for most of the people in the world, but I try to make sure I don’t do it often, and I certainly won’t do it when you’re having a bad day or going through something that’s already hurting your heart.

I understand that we do have a responsibility to “keep it real” for our friends and families. Life isn’t flowers and butterflies all the time, and sometimes we have to speak up.

But… not always. There’s a time and a place for it.

Heartache is heartache. To put a degree of hurt on heartache is absurd, to me. You don’t know what that person is feeling or going through, to suggest that things could be worse or that it’s really not a big deal is incredibly insensitive and uncompassionate.

Can we just allow people to feel? Can we stop telling people that their feelings are invalid? If you can’t come up with a comforting word for someone who is having a tough time, or you feel their feelings really are exaggerated and ridiculous, don’t say anything at all. Don’t guilt them into feelings by reminding them in any way that, “things could be worse” or “others have it much worse than you do.” It doesn’t help.

Don’t agree with me? I think the Bible makes it pretty clear: