A middle-aged woman with her blonde hair in a ponytail held her hands together at her chest and wept. “Thank you,” she said. I could barely hear her through the thick door and barely see her through the small glass window.

“Thank you, thank you,” she kept saying. All I had done was set a plate of cookies and a bag of fruit and nuts outside her cell and told her, “Merry Christmas.” Her gratitude made it seem like I had done so much more. 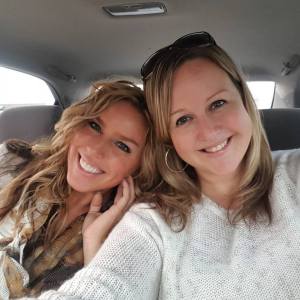 On Saturday, I volunteered to spread some Christmas cheer at the Allen County jail with about 100 other volunteers, including my friend, Tawny. I was inspired to volunteer after taking a tour of the jail for my job as a Communications Coordinator with the St. Joseph Community Health Foundation.

My initial response was that I’d bake some cookies for the event, as each inmate receives a plate of cookies, but as I thought about it more, I knew I wanted to be there in person. I dropped off my cookies on Friday morning, and on Saturday at 1 pm, Tawny and I went back to the jail not really knowing what to expect.

“A few years ago I was locked up in here for a DUI,” one of the volunteers told us. “And there was supposed to be this huge fight on the day the volunteers were bringing us cookies. I cried when you guys came, and so did others, and it changed everything around us so much so that the big fight never happened. I knew I had to be a part of this ministry when I got out, so here I am today.”

We were a diverse group on Saturday. All of us Christians, but from different backgrounds. We were different ages, races and dressed differently, but we had one goal in mind: let those locked up know that someone cares about them.

The jail chaplain divided us into four groups. We would each be visiting eight cell blocks in the jail. Tawny and I both expected to be out in the open with the inmates, but that wasn’t the case.

The first cell block we went to was under tight security. It was a mid-sized room with cement floors and white walls. Lining the walls were the doors of the cells, and in the small windows of each door were pressed the faces of female inmates.

We sang “Joy to the World” as we walked in, and then began putting cookies and bags outside their cells. The women cheered, some cried, others yelled to make sure they thanked us.

It broke my heart more than you can imagine. I realize they did something wrong to get in there, but I just can’t imagine being so “bad” that you have to stay in your cell, your cage, for most of each and every day. I tried to put myself in their shoes, and it was just so difficult to see them trapped, and for the rest of us to be so free.

There were only two cell blocks we went in that were open. We got to actually hand the cookies and bags to the inmates. It was nice to have that interaction. It was fun to sing carols with them and see the joy on many of their faces.

At each cell block, two people from our group would talk. A few pastors read scripture, while others told parables from the Bible. They asked for volunteers at each cell block, and at one point my friend Tawny spoke up.

Sure I had given my testimony plenty of times, but I was typically prepared well in advance. But Tawny inspired me, and I agreed to give mine as well.

We walked into the cell block where men of all shapes and sizes and races had their faces pressed against the glass windows in their cell doors to see all of us and hear what we had to say.

God gave Tawny and I just the right words to give our testimonies in lockup. Short and sweet, we shared of the wonderful love of Jesus, and how life is so much better with faith in Him.

At about the sixth cell block, I was taking cookies to put outside a door when I looked through the window to say hello to the inmates inside. One was at the window, but another was resting on his cot at the back of the cell. We made eye contact and immediately recognized each other.

He jumped off his cot and ran to the door.

“I know you from the Rescue Mission!” I yelled through the door.

He was smiling so big as he nodded and said, “You serve breakfast!” referring to how I volunteer to serve breakfast at a local homeless shelter. He was an elderly gentlemen who came through the line each time I was there.

And now, he was in jail.

“I will pray for you!” I told him through the door.

He smiled and said,”God bless you!”

At our final cell block we did everything we’d done at all the other cell blocks. We sang carols, gave cookies, listened to testimonies, and before leaving we walked up to each window to tell the inmates, “Merry Christmas!” The final window had lasting impact on me and on Tawny.

The man inside stared through his window, his eyes red and filled with tears. His bottom lip quivered and it was clear that he was so touched by what was happening. It took everything in us not to break down and cry ourselves.

Christmas in jail. This was it. They don’t get anything on Christmas day. Our cookies and visit are the extent of their holiday cheer.

Some people found it odd that we went to spread holiday cheer to a group of people who had broken the law. Some would only be there for a year or so, and others were just waiting to be transferred to prison. So why, why do something kind for all these people who have so clearly made horrible choices?

Because Jesus would have. Plain and simple.

Jesus was born so He could die for my sins. And your sins. And the sins of every single inmate in the Allen County Jail. Jesus tells us in Luke 3:36, “Be merciful, just as your Father is merciful.”

I have a new holiday tradition: Christmas at the jail. To do something so small that means a lot to so many people is inspiring. I know it wasn’t the work we did on Saturday that left so many inmates in tears, but it was the spirit of God, the spirit of Christmas.

“For you, Lord, are good, and ready to forgive;
and plenteous in mercy to all them that call on you.”
Psalm 86:5