Note: I am very slowly writing a memoir about the year of my life that I spent in Uganda. I decided to share the first chapter to see what people think, especially since today marks the three-year anniversary of when I left for Uganda. I don’t know if the flashbacks are confusing or not, so I’d love any input you have on the first chapter of my memoir. Please be honest! Any and all feedback is welcome, but also keep in mind that this is a very, very rough draft. Thank you!

“Headset?” the flight attendant asked me as she passed by my seat.

I was in comfortable clothes- sweatpants, a blue t-shirt, and a hoodie. I wore no makeup. Would have been pointless to wear makeup considering all the tears I’d shed saying goodbye to mom and dad at the airport. I wouldn’t be seeing them for almost a year. I was moving to Uganda. 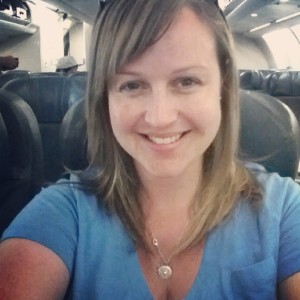 Would I have Instagram in Uganda? I wasn’t sure. So I figured I’d take one final selfie before flying over the Atlantic. I held out my phone and snapped the picture. I had no makeup on, but there was definitely a glow to my smile. My blue eyes looked bright and my hair, recently colored “blah-brown,” hung in straight strands down to the tops of my shoulders. My face was rounder than I wanted. In the weeks leading up to my move, everyone I knew took me out to eat. I had probably gained a good 10 pounds before I left the US. I figured it didn’t matter. After all, I was going to Africa. What’s there to eat in Africa?

Before I knew it we were high in the sky and my home country disappeared beneath the clouds. I tried to watch a movie but drifted off to sleep just a few minutes in.

I started bawling. Sobbing. Crying my eyes out. Two different, totally unrelated people from different states had sent me emails with the same basic message – “God wants you to serve overseas.” I had known this for years, but never had it in me to leave friends and family and completely follow God. But God was making it crystal clear in every way possible. He didn’t want me to take a two-week long mission trip to Niger. Already did that. He didn’t want me to go to Nicaragua with my church for a week. Already did that. He didn’t even just want me to go to Zambia for 10 days that coming June, which I ended up doing. He wanted more of me.

My office door was open, so I closed it and then had a conversation with my maker.

The next day one of my Christian mentors told me about a website that might help point me in the right direction. I decided to check it out.

I read it a second time.

I have a Master’s degree in Education. Five and a half years’ experience teaching high school English. And my heart is in Africa. But there was no way it would be that easy. Would it?

After a few episodes of television shows I didn’t care for, some journaling and then a few movies, our plane finally arrived in Amsterdam where I had a one-hour layover. No time for shopping or even a Starbucks, I went from one plane to another and before I knew it we were on our way to Kigali, Rwanda, our final stop before Uganda.

I was already tired and figuring out the time difference. Should I be awake right now? Should I sleep for a few hours? Maybe I should stay up so I’ll sleep well when I get to Uganda. But what time will it be then? I didn’t have much time to think. All of a sudden I was in another deep sleep.

I woke up at 4:30 a.m. with a jolt and saw the flashing purple light on my phone. It could have been SPAM, could have been a new credit card bill arriving in my email inbox, but something told me it was something else, something important.

It was an email from the principal at Heritage International School in Kampala, Uganda. I had interviewed with them a few weeks before.

“Hello Natalie! We would like to offer you the position of high school English teacher at Heritage. It is a two-year commitment and you would be able to return to the US in the summer between school years. We look forward to hearing from you and you becoming a part of our Heritage team!”

I was dumbfounded. It had been less than a month since I saw the listing online and applied. All of a sudden, I was offered a job. I got the job. I was moving to Uganda for at least two years, maybe longer.

I couldn’t breathe. I began to hyperventilate and tears streamed down my face. My family. My friends. My precious nieces who hold the key to my heart. Two Christmases without them. Two birthdays away from home. Two years of life away from the people I love most…

It was a no-brainer. I would go. I would move to Uganda and teach high school English. It would be my “in” to the mission field. After two years teaching, I would probably become a full-time missionary somewhere else.  God was working everything out in ways only He could.

I was happy to serve. I was excited to serve. I thought I knew exactly what God was about to do in my life.

“Ladies and gentlemen, those exiting the plane are asked to throw any plastic bags in the trash before entering Rwanda as they are not allowed in the country,” I heard over the loudspeaker in the plane.

We had arrived in Rwanda, which meant only another hour or so flight to Entebbe Airport in Uganda. There was no way I’d be sleeping anymore on the plane. I was too excited and too nervous to even consider sleeping any longer. 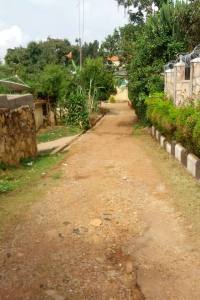 The plane landed and my stomach did a flip-flop. We had arrived. I was in Uganda, my home for the next two years, at least. While I was ready to see the country and explore its beauty, it was almost 10 p.m. and not even anyone from school would be there to welcome me, just a driver. His name was David, and he wasn’t too pleased that my luggage had been lost and it took a couple of hours to locate it. It was after midnight when I finally made my way out of the airport and saw him standing there with a sign that read, “Heritage International School.”

“I am so sorry,” I said. “They lost one of my bags, and I didn’t have a way to get ahold of you to let you know I would be late coming out!”

“Es no problem,” David told me with his thick Ugandan accent as he loaded up my luggage onto a cart with wheels. “Es late, but we will be fine.”

I followed him into the parking lot where a school van was parked. We loaded up my luggage, and then I went to get in the front seat.

“Wrong side, madam!” David told me, and I realized I was getting in the driver’s seat.

Uganda at night looked like everywhere else I had been in Africa. Our one-hour drive from Entebbe to Kampala was just like all the other late-night rides I’d had in Zambia and Niger. The difference this time was that I was there for good, not just a week or so.

David drove fast on the open road, but I could tell he was in control. My main prayer was that he stayed awake, but all of a sudden we were passing a giant sign that read, “Heritage International School” in blue letters with a drawing of a lion, the school mascot. About a mile away we turned off the paved road and onto a bumpy dirt road. We were getting close, and I could hardly stand the excitement of seeing what would be my home for at least the next few years.

We pulled up to a big gate and David honked. Over the top of the gate I could see a beautiful house peeking through some palm trees. As the guard opened the gate to let us in, it revealed a gorgeous two-story home, MY home.

“Hello!” I heard someone say as she came out the front door. It was after 1 a.m. but my two new housemates were waiting for my arrival and to greet me with hugs.

“I’m Debby,” one of them said with a strong accent, although I couldn’t place where it was from. Debby was tall and skinny with medium-length light brown hair, and the girl next to her had longer, redish-blonde hair and pale, white skin.

“Elize,” the other girl said. “Welcome to Uganda, Natalie!”

“Thank you!” I said as we lifted my bags out of the van.

The girls helped me move my bags into my bedroom and gave me a quick tour of the house. There was a huge open staircase that went up to Debby and Elize’s separate suites. They showed me to my room after we looked at the giant living room, dining room, and massive kitchen.

“We’re very tired,” Debby said. “Do you mind if we all go to bed and talk in the morning?”

“Of course not!” I said. “Thank you for welcoming me. Goodnight!” 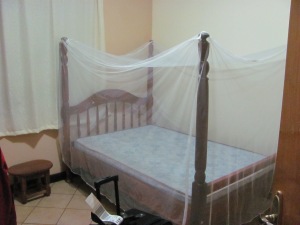 Once the girls left my suite, complete with closets and a bathroom of my own, I sat on my bed and smiled. I couldn’t believe that this was where I was going to live. I knew I wouldn’t be sleeping in a hut, but I never in a million years imagined that I would be in a big, beautiful house with a bedroom and bathroom to myself.

I was so tired that I didn’t unpack a thing. I was told ahead of time that linens would be there waiting for me, but they were not. So I grabbed my hoodie to use as a pillow, pulled down my mosquito net, curled up on my bed and drifted off to sleep.

One month. That was all I had left on my lease at Arbor Lakes, and it was time to decide if I would stay or if I would go. I wasn’t even sure I wanted to stay in Fort Wayne, Indiana, so the thought of signing another year-long lease horrified me.

“We leave in a month, you know,” my mom said one evening over dinner. “Stay in the house until you decide what you want to do. We’ll be in Florida, and you’ll have the house to yourself. Pay the utilities and that’s all you have to worry about.”

It was definitely tempting, and after a lot of prayer and talking with friends, I decided it was the best plan for me. Living rent-free would definitely help me pay off credit card bills and save money for a new place.

As everything fell into place and I began to move my furniture into storage, something strange began to stir in my soul.

“What do you mean?” she asked.

“I don’t even know,” I said. “I just know that God has something planned. God did this.”

It wasn’t until five months later that it all made sense.