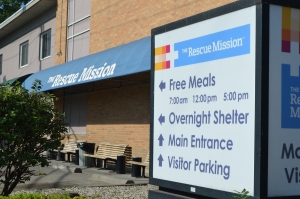 I still can’t believe I almost didn’t take this job. The only reason I was hesitant was because I had been at my previous job for only 8 months. Had I not listened to God’s obvious calling, I wouldn’t be at the greatest and most fulfilling job I have ever had. Yes, it took until I was 35 to find it.

It’s now been one year that I have been the Marketing Director of The Rescue Mission in Fort Wayne, Ind. I know that no job is perfect. But to be honest, I believe that this is as good as it gets. It’s the first Christian organization I’ve worked for where they actually practice what they preach- love, grace, and mercy, all while also having a firm foundation in TRUTH. I didn’t think it was possible.

I want to share a few things I’ve learned this past year, my first year working for The Rescue Mission, whose mission is: “To provide, through the power of Jesus Christ, a home for the homeless, food for the hungry, and hope for their future.”

Seems kind of obvious, doesn’t it? While I’ve known many nice, non-judgmental, loving Christian women, I’ve known far more who weren’t, especially in the workplace. My faith has been completely restored in fellow Christian women this year. Don’t get me wrong, we do NOT always agree. There have been tough conversations. Women have hurt my feelings. I have hurt other women’s feelings. But we have the conversations that are necessary to move past them. I work with the most phenomenal women. I couldn’t ask for better women to have in my life, and the example they set has improved my faith and my walk with God.

Lesson #2: Everyone thinks they’re an expert on homelessness

New ideas can be groundbreaking. But they can also do more harm than good. I’ve learned this year that everyone has an idea of how to “solve” homelessness. These ideas typically come from people who haven’t even spent any time with the homeless. The Rescue Mission, on the other hand, is on the cutting edge of everything related to helping the homeless. We feed them. We give them shelter. We welcome them into our programming and show them how to find real change. But most importantly… we talk to them. Every single day. Our organization has been doing so for more than 100 years. And yet random people in the community think they have better ideas on how to help the homeless.

I learned early on that enabling the homeless to stay homeless is very prevalent in our society. I sort of understood, but didn’t fully understand until I had a conversation with one of our residents.

This gentleman, in his 50’s, explained to me that people in town were keeping him homeless. Because they gave him everything he needed, he could easily stay homeless without being held accountable for anything. He could drink. He could do drugs. He didn’t have to get a job. Luckily, someone from The Rescue Mission offered him REAL CHANGE, and he entered the program. He told me, “With those people giving me everything I needed, I would have been homeless for the rest of my life.”

It’s tough to hear, especially when people’s hearts are in the right place, but it’s true. The whole idea of “toxic charity” and “when helping hurts” is a real issue. If you want to help the homeless, direct them to a place where they can change their lives. Don’t put a bandage on the problem. Don’t keep them homeless.

Lesson #4: Because of the nature of our clientele, there will be heartbreak

“Relapse is part of recovery,” they told me early on here at The Rescue Mission. Still, that didn’t make it any easier when people you grow to love and have so much hope for end up relapsing. It’s absolutely heartbreaking.

But the worst heartbreak of the year, for me, was when one of our older residents relapsed. He had fought alcohol addiction from a very young age. He lost everything because of it. He had been sober for two years at The Rescue Mission, and for some reason, one day he just left and didn’t say goodbye to anyone. This was heartbreaking for many of us. He was so caring and loved the Lord. But he left. And he relapsed, and it lead to his death.

I didn’t expect this kind of heartache when I started working here. In one year we had three memorial services for men who died. But what I do know about those men is that they loved Jesus. I know that each of them is now with Him. Their battles with mental illness and addictions are over. Praise God for that!

Those are the names of either residents who have completed the long-term program at The Rescue Mission in the past year, or residents who have told me their stories for newsletters and videos. And let me tell you, to put it bluntly, these people have been through hell.

For some of them, ending up homeless came because of addiction. For others, homelessness was due to mental illness. And still for others, it was devastating trauma that left them homeless. Some are in their 20’s, others in their 60’s. But their stories, as brutal and heartbreaking as they are, have taken a turn. They each ended up at The Rescue Mission. They each learned a new way to live life with a faith in Jesus Christ.

I believe in miracles. When I see the transformation in these people, I am blown away that God is so powerful that He can take a woman who was once sexually abused by her own father and make her into an amazing mother with a job and a house. He took a heroine dealer and user and made him into a young man on fire for God. He took a Vietnamese refugee, who spent 20 years in prison for attempted murder, and made him into one of the hardest and most ethical workers at a factory in town. 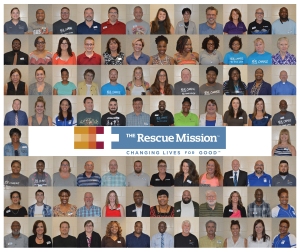 I can’t wait to see what next year brings. I know there will be heartache. I know that 4th quarter (our “Super Bowl” season) will make me want to tear my hair out. I know that I’ll probably grumble when our CEO sends me a text about work before 8AM on a Saturday. But I also know that God is using us to do His work, and I have never felt more purpose in my life.

I don’t have a husband, or children, or even a cat or a dog. But thank you, God, for my career and place of employment. I have never been so fulfilled.

“Look to the Lord and His strength; seek His face always.”
1 Chronicles 16:11

One thought on “My first year working for a homeless ministry…”