I had been working as the Director of Marketing at The Rescue Mission, a homeless ministry in Fort Wayne, Indiana, for a month when I met Doug. He was selected to receive a special basket of goodies from a local Christian radio station. Doug was nominated by some staff members who thought he could use some encouragement.

Doug was such a likable guy. He was tall, had a southern drawl, and was just plain hilarious. No doubt about it, Doug was loved. And while we shouldn’t have had “favorites” out of the many homeless men we served, Doug was an obvious favorite. So much so that for the fundraising banquet in November 2016, Doug was The Rescue Mission’s shining testimony. His life had been changed.

That day I learned a lot about Doug. The five-minute video did its best to capture his story, but there was so, so much more. Doug went through things no child or adult should ever have to experience. Unfortunately, he turned to alcohol at a young age, and it ruined his life. 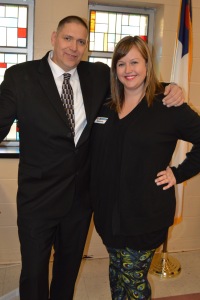 Doug found sobriety at The Rescue Mission. For awhile. Doug graduated the long-term program in February 2017, had himself an incredible job, and found himself an apartment. But by the time summer came around, Doug had relapsed.

Doug came back to The Rescue Mission and was OK for awhile. Then he relapsed again.

Repeat. Repeat. Repeat. Thrown in there was a long list of health problems, some drinking-related and some not. There were quite a few times when we were told, “Doug probably won’t make it.” But until a week ago, he always made it.

He always eventually went back to being lovable Doug. Even without a filter, Doug was so lovable. After dying my hair dark one fall, he said to me, “Why did you do that? It makes you look old!” Naturally, I gave him crap about that for as long as I could. Doug was like my big brother at The Rescue Mission. I knew I could count on him for a laugh, a hug, and an honest response to anything I asked.

After three and a half years, I left my job at The Rescue Mission. At that time, I knew Doug was in Marion, Indiana. I knew he was in bad shape and drinking again. Sure enough, about a month after I left my job, Doug was back.

And on Friday, November 15, I received a call from a good friend at The Rescue Mission. Doug had been moved to a nursing home a few weeks ago. He had liver cancer. Hospice said he had only a few days to live.

I broke down on the phone, but there was a part of me that didn’t believe it. Doug had already had so many brushes with death, and he escaped them all.

My friend Brittany, who also once worked at the Mission, and I planned to visit on Saturday. However, I received a call Friday evening that Doug only had hours to live.

When we got to the nursing home and I saw Doug, I knew that was it. He wasn’t coherent. He was moaning. He was skin and bones. His skin was discolored. I burst into tears. It wasn’t the Doug I knew and loved.

The room was full of people who loved Doug, most of them from The Rescue Mission, and a few friends from Indianapolis. Doug didn’t have a relationship with anyone from his biological family.

As we stood in the room around Doug’s bed, someone pulled up the video from The Rescue Mission banquet in 2016 and showed it to one of Doug’s friends. Everyone else was talking to each other, but there was what felt like a scripted pause in the room and we heard Doug’s voice in the video say, “Who would there even be to tell if I died? Nobody.”

That night, there were 12 of us around Doug’s bed as he left this world to be with Jesus. Doug may not have been victorious in sobriety, but he certainly did know and love the Lord. And while I cried so hard that night that my eyes hurt for days, I was incredibly relieved and thankful that Doug’s battle with alcoholism was over. No more struggling. No more pain. Doug was at peace.

Doug will always mean the world to me. We got to experience a Doug that his family never knew: a sober Doug that loved us with all his heart, just as we loved him. He will be greatly missed.

“Those who walk uprightly enter into peace;
they find rest as they lie in death.”
Isaiah 57:2

One thought on “Remembering Doug”