I’m not living the life I envisioned for myself years ago. As I turn 35, I imagine that my younger self would have a Grand Canyon-sized panic attack if I were told that I’d be living with my parents in my mid-30’s.

Hi. My name is Natalie. I am turning 35 today, and I live with my parents.

And believe it or not, that’s not a bad thing. While there was once a major stigma attached to being an adult and living at home, I’ve found that most people’s reactions are, “You live at home? Sweet! Way to pay some stuff off.” I actually know quite a few 30-somethings who live at home these days.

It all started in October of 2012 when my lease was up at my apartment here in Fort Wayne, Ind. Since graduating from IU in 2004, I had lived in three apartments in LaGrange, Georgia, and two apartments in Fort Wayne. I wasn’t sure what my next step in life would be, so my parents suggested I watch their house for them while they spent the winter in Florida. Something was tugging at my heart saying, “Don’t get locked in to a lease.” So I gave in to that feeling, put my belongings in storage, and agreed to stay at my mom and dad’s house for the winter. 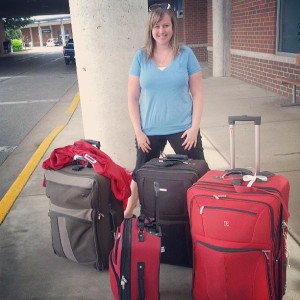 It turned out to be a good move. It was in March of 2013 that I decided to move to Uganda to teach high school English. I jumped ahead of God a little bit in deciding I would probably be there for many, many years, so I sold everything. All my furniture, pots and pans, etc. etc. All that was left was me and the suitcases I took to Uganda.

I often wonder if God chuckled when I sold everything. He knew I’d only be in Uganda for one year. I didn’t realize it until I spent most of my year oversees being sick, and had to return to the US for better medical care.

So there I was in 2014,. Back from Uganda, seeing every doctor and specialist in town who would try to solve my mysterious illness, my medical bills growing larger and larger, and I had no furniture to put in a place of my own even if I could afford my own apartment. It made sense: move back in with mom and dad.

I decided I would spend another winter in my parents’ house and find my own place in the spring. But the medical bills were outrageous. I still had no furniture. Mom and dad were awesome enough to suggest I stay through just one more winter.

My medical bills are nearly paid off. I’m making major dents in my other debts. Although I’d love to have my own place with my own furniture and belongings again, it’s kind of irresponsible of me to do so when I have this opportunity in front of me.

I’m incredibly lucky that my parents allow me to stay at their home for a very low cost. And they don’t really even spend just the winters in Florida anymore, it’s turned into fall and spring as well. They’re pretty much only home in the summer and for a little bit around the holidays.

For me, this all goes back to selling everything and moving to Uganda. Would I do things differently? Not a chance.

I’m 35. I live at home. I’m paying things off. I’m saving money. I’m building myself back up to where it makes good financial sense for me to get my own place again. I’m not a failure because I’m living at home. My circumstances have brought me here, and I’m making intelligent financial decisions.

I can’t say what 35 has in store for me. Maybe the time will come to start buying furniture and get my own place. Maybe something completely unexpected will happen that I can’t even imagine right now. All I know is that I’m resting peacefully in God’s hands, and His plans for me are better than any others. 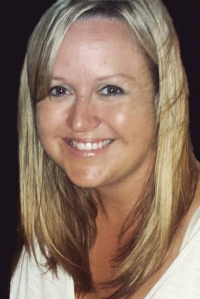 On October 22, I turn 35 years old. In those 35 years, I have learned a lot: some funny things, some serious things, some amazing things. So here are 35 insights/bits of advice I have come to know in my life so far:

It was a beautiful October day in 1980 when I popped into this world. I can’t say it was necessarily a wonderful day for my parents, as I was immediately taken to intensive care for meconium aspiration. Yes, I’d been eating my own poop. Is it really any wonder why I will now eat almost anything? Clearly it tastes much better than what I was munching on when I was born.

Needless to say, baby Natalie made it, and for 34 years now I’ve been celebrating my birthday. On October 22, I’ll celebrate my birthday for the 35th time. “Yay! Happy Anniversary of the day you were eating your own feces!”

I love my birthday. Although I’m in my 30’s and no one really gets me presents anymore, I still love it. I love the Facebook birthday wishes, the texts, the phone calls, and I love eating and drinking whatever I feel like on my birthday. OK, so I pretty much do that for the entire month of October. When you’re single, no one really celebrates you. No mother’s day. No anniversary to celebrate. Nothing on Valentine’s Day. Not much at Christmas. So your birthday is pretty awesome. I fully embrace it.

Here are some of my favorite, and least favorite, birthday memories:

16th Birthday – 1996: Unforgettable
I had a bunch of friends over after cheering at the football game the week of my birthday, but my real birthday memory was when my dad took me on my “first date.” We dressed up, he gave me flowers, and then he drove us to Fort Wayne where we ate at a fancy French restaurant. I remember ordering the flaming duck! It was delicious! It was also a night with my dad that I will never, ever forget. 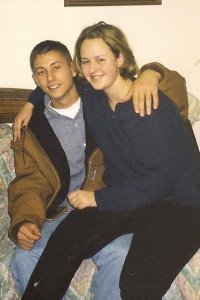 18th Birthday – 1998: The Disappearing Boyfriend
Brent was the real deal. He was tall. Handsome. Sweet. A farm boy from a rival school in the county. We were the perfect match! We’d been dating for a few months, and on my 18th birthday, he had two dozen roses delivered to my house. That night, he came to my birthday party, where we had a blast. He kissed me goodbye before he left, and I never heard from or saw him again.

20th Birthday – 2000: My Parents Hate Me
I was a sophomore in college when my friend Brooke and I decided to visit her hometown in Illinois on my birthday weekend. We would take my Chevy Cavalier, A.K.A. “Peppy”, on the long drive to Peoria. As a college student, I didn’t have much money, but I assumed my parents would pull through for me with some cash on my birthday.

Mom and dad came to Marion, where we met at ChiChi’s for my birthday dinner, just the three of us. After we ordered our food, mom handed me a card. “Happy Birthday!” she said. I was so excited. I opened the card.

I looked in the envelope. Nothing.

I looked at my parents, and mom said, “Read it!”

It read something like this: “As you know, you owe us $500 for the work we had done on your car this summer. For your birthday, we are taking off $250 of the money you owe us! We love you so much! Happy Birthday! Love, Mom and Dad.”

I looked up at my parents, who were smiling, as if they had done me some huge favor. (My 19-year-old self was way too mortified to realize that they actually HAD done me a huge favor.) I waited for one of them to say, “Just kidding!” But it never came.

“How could you do this to me? Are you serious? This is my birthday present?” I screamed through tears.

Wrong answer. I’ll never forget that terrible, terrible night. Nothing says, “Happy Birthday” like being told you now owe someone only $250.

21st Birthday, 2001: Surprise!
I was the first in our apartment to turn 21, so I didn’t expect a very exciting birthday. I was proved wrong when I walked in our apartment after a late class and my roommates threw me a big surprise party. It was rather masterful, as I seriously had absolutely no idea they were doing anything like that. I think the look on my face says it all! There were decorations, friends, and, yes, a keg. We had a blast that night dancing and celebrating my 21st birthday! 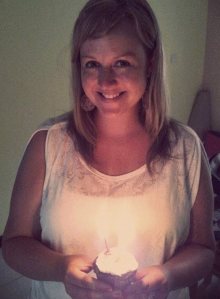 33rd Birthday, 2013: An African Birthday
I was actually pretty down-in-the-dumps when my 33rd birthday came around. I had been living in Uganda for about three months when my day arrived, and I was afraid no one would care. After all, my lifelong friends and family members were on the other side of the planet. However, my birthday was spectacular. Friends took me out, roommates made me cupcakes, and my students gave me all sorts of cards and letters to celebrate my birthday. I’ll never forget my birthday in Uganda!

35th Birthday, 2015: To Be Determined
I’m not sure what is in store for my birthday this year. I know I’ll be spending a weekend in Indianapolis with my birthday-bestie Becca, which is ALWAYS memorable. I imagine I’ll have a birthday dinner with my parents, and probably one with my guy. If there’s one thing I’ve learned over the years, it’s that it’s not the quantity of people around you, it’s the quality. And I have some seriously amazing people around me who make life incredible each day I’m alive.